Up early in anticipation of our trip today to Victoria Falls!
After a hearty breakfast, we said our goodbyes to Moira and Lawrence. Shaun arrived to collect us, and we were off to OR Tambo International Airport to fly to Victoria Falls in Zimbabwe. Our loads were a bit lighter as we had just one duffle bag each! Shaun kindly agreed to store the remainder of our belongings/suitcases at his home until we met up again in a week’s time. And we were off … Zimbabwe here we come!
After only a relatively short flight (1.5 hours), we touched down in Victoria Falls at about 1:00pm. We then queued and waited 1 hour for our visas to be processed. By the time our visas were finalised, we were the last passengers to clear the terminal (ours were the last bags on the baggage carousel!). NB. Just have to make mention of a Zimbabwean Government sign at the airport that stated “It is a criminal offence in Zimbabwe to make any derogatory or insulting comments about President Mugabe. Any person making such comments is liable to arrest and prosecution.”
A representative from our tour company, Wild Horizons, met us at the terminal and took us to our awaiting minivan (after local dance troupe stationed at the airport terminal entrance welcomed us to Zimbabwe!). Once in the minivan, we met our Tour Director, Charles (who reminded me of Bob Marley). Turned out Charles has a degree in mathematics, and is fluent in five languages (two being European)! And we were off to our hotel. En route, we passed one form of local transport, a donkey cart. And saw other townsfolk transporting all their food and belongings (some pretty heavy loads) on their bicycles. Talking to Charles on the way to our hotel, we asked about activities for later in the afternoon as we had a 2-3 hour window of opportunity before our BOMA dinner that evening. I specifically asked about the Victoria Falls helicopter rides I had read about beforehand. He said yes, we could likely get booked on that at about 4:00pm, and said he would make a call to confirm. Di and Steve didn’t want to do it, however Heather and Garv were keen … and so it was done! We were all confirmed to do our helicopter flights over the Victoria Falls … at $150 per person! YAY, what a thrill!! 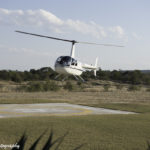 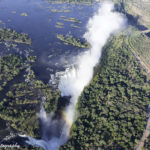 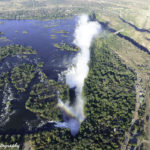 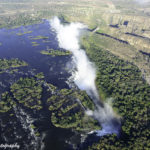 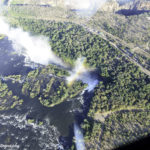 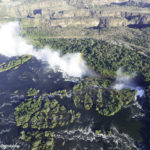 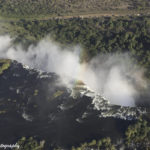 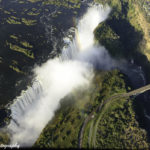 We then arrived at our accommodation, the amazing Kingdom Hotel, which featured great domes, pillars, and bridges over its many water features. The architecture was designed to resemble that of the city of Munhumutapa, the once mighty capital of the ancient Shona Kingdom. Reminiscent of ‘Indiana Jones’! We basically had time to check in, deposit our bags, have a quick look around, then it was off for our helicopter ride. While Heather, Garv, Norman and I would be off on the helicopter, Di and Steve were going to indulge in high tea at the renowned Victoria Falls Hotel, a magnificent colonial hotel built in 1904.
Let’s experience Victoria Falls … Firstly, some impressive stats about these falls …
Victoria Falls is one of the seven natural wonders of the world. 1800 metres wide, and 108 metres high, it’s one and a half times wider than Niagara Falls and is twice the height making it the biggest curtain of water in the world. A million litres of water per second are funnelled over the 108 metre drop, creating a plume of spray that can sometimes be seen as far away as 50 kilometres. Understandably it is known as “Mosi oa Tunya” (“the smoke that thunders”)!
And we were off to Bonisair Helicopters for our ‘Livingstone’s Angels Flight’. Once there, we sat through our safety briefing, after which we were weighed, then it was on board! Norman and I had our flight first. With experienced Rhodesian pilot, Tom, at the controls, we were up and away. Well … words can’t describe the jaw-dropping sight of these breathtaking falls from our vantage point where we could take in the whole panorama! The sheer size and magnificence of the falls was a thing to behold! And our day was beautiful and sunny with clear views so we were even treated to rainbows when viewing the falls! Utterly superb, and worth every cent!!
Then it was back to base for Heather and Garv to have their turn.
After both flights were finished, Norman and I bought videos of the flights from Bonisair as a memory of our wonderful experience. We were on such a high!!
Then it was back to the Kingdom Hotel where we showered, changed and all met up again, ready for our traditional BOMA dinner. We were collected by a Wild Horizons guide and driven the 20 minutes to the BOMA. Upon arrival where we were welcomed with a traditional greeting, then given ‘chitenges’ (traditional robes) to wear. We were then seated at our table. The food included a wide selection of traditional Zimbabwean dishes including warthog, crocodile, impala, buffalo and kudu. And lovely salads. Norman even braved the Mopani worm, and was duly awarded a certificate of achievement! The night included Amakwezi traditional dancers, singers, and their amazing drummers, Amazulu. We were each given a drum and joined in as well!
All in all, a fun night.
Back to the Kingdom Hotel to bed …