We’re on a lion hunt!
And off we headed on our early morning safari. First sighting of the day was a big white rhino! 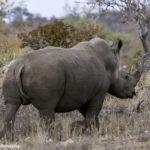 What a great start to the day! Soon after that we came across a pack of African wild dogs on a hunt. Shaun was pretty excited about this sighting as the African wild dog is the most endangered carnivore in South Africa. This pack was on a hunt, and scenting for their prey. We followed them for about 20 minutes and it was incredible to see their highly organised way of hunting and working together. It was evident what incredibly intelligent and social animals they are. 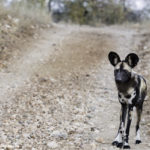 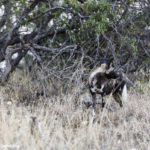 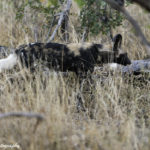 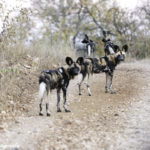 Sightings for the morning included giraffe, honey badgers, and bushbuck. Shaun surprised us with a wonderful morning tea on a rise beside the Olifants River! We had a 180° degree view of the river and a pod of hippos oblivious to us. 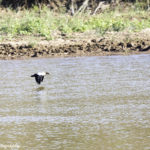 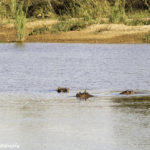 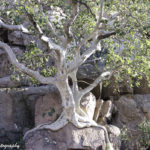 During morning tea Wiseman recounted in detail a fabulous story about him being entrapped by three lions … comes with the territory it seems for obtaining Dangerous Game Guide accreditation!! Happy to say he passed! At morning tea time Heather disappeared off into the bush momentarily but suffered stage fright … hahahaha!!!
After morning tea we were off again until Shaun spotted a tree that caught his interest. It was then that we learned of his passion for trees, more especially photographing them. So Norman too made a beeline for the tree, duly lay down in the scrub, and took some shots. 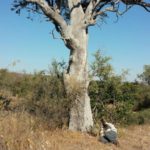 At one with nature!
Then it was back to Nyeleti for an early lunch. Lindsay had prepared for us an eggplant bake, with lentils and corn fritters. During our midday “rest period” we observed a herd of Cape buffalo grazing by the river. What a great sight … all from our dining table! While we had our break, Shaun made a mercy dash to another of the Klaserie Camps to top up our wine stocks which were at a critical level! Ah, we were saved by the bell … thank you Shaun!! Then we were off again on our afternoon safari, all the while still tracking big cats. Sightings for the afternoon included warthogs, giraffe, bush babies, a genet, and steenbok. 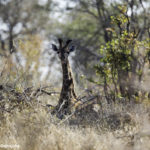 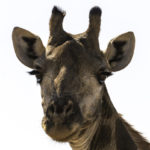 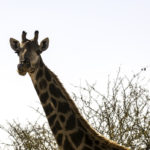 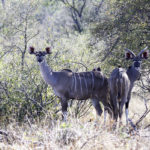 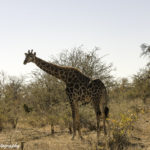 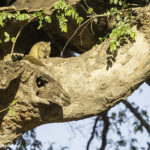 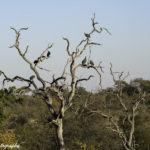 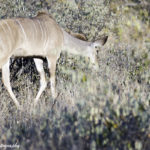 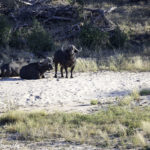 Sundowners were at the old airport hangar lookout where the sun, a giant orange ball of fire, descended, lighting up the sky in the most vibrant red, pink and purple colours! Truly magnificent!
Then it was back to our lodging for our last dinner in this truly glorious place. Lindsay had prepared cauliflower and blue cheese soup, followed by slow cooked lamb, potatoes and greens. Most hearty!
Then we sat round our last camp fire in the Klaserie and recounted our “top 3”experiences of the trip so far. It was fabulous to re-live those great moments again. And plenty of funny stories were also shared, including Shaun’s “Mrs Tastic” tale (absolutely hilarious!) and Steve’s “long nose, long tail, short legged, rough backed terrier” joke!
Then off to bed … last night in the Klaserie.
As a side note – It is worth mentioning here that over the past few days Shaun had taught us the Zulu word for ‘thank you’… ‘siyabonga’. Well … I was trying it out at every opportunity!! At least five unsuspecting locals fell victim to my Zulu outbursts, one child even answering me today! GO ME!!